The 23rd ICV Meeting was organized on September 30, 2015 at the Holiday Inn Hotel in Belgrad, in cooperation with the Bisnode company. The topic of the meeting was “BISNODE SMART ANALYTICS”, and the meeting was attended by over 100 controllers and CFOs. On this occasion, Bisnode presented the tools that could be of use to controllers and CFOs in conducting analyses. Special attention was paid to Portfolio Intelligence.

The meeting was opened by Bojan Šćepanović, President of ICV Serbia and Director of Management Centre Belgrade. As is his custom, Bojan shared a few anecdotes with the participants, and this time he was in the mood to link the Farm show, Mimi Oro and controlling. What’s the connection? Well, one should come to an ICV meeting and listen to Bojan – there’s always a lot of laughing in addition to controlling.

Afterwards, Bojan presented three main speakers – the three musketeers of controlling. The speakers at the 23rd ICV Serbia Meeting were: 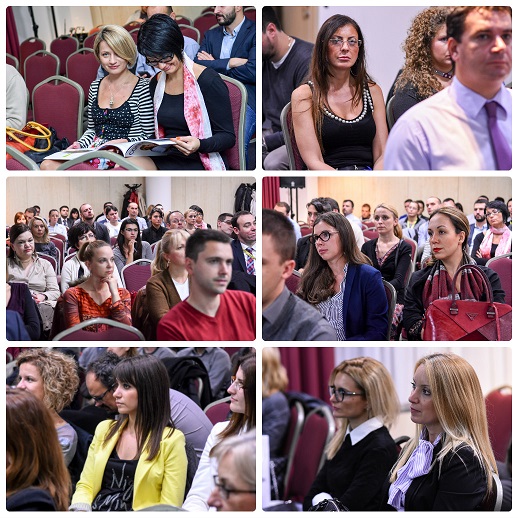 The first speaker was Nenad Radunović, Factory Controller at Bambi. Nenad shared his factory controlling experience with the participants of the meeting.

The next speaker was Branislav Lončar, CFO at Leo Burnett. Branislav familiarised us with the philosophy of Leo Burnett, the largest marketing agency in Serbia with over 150 employees.

Bane had a few great video clips, one of them telling about how Leo Burnett was created in 1930s in Chicago.

The “robot” description was especially interesting. Controllers at Leo Burnett exist at the local level in Belgrade as well as at the Paris headquarters. There are also controllers at the Shared Service Centre for Serbia located in Hungary.

Considering that time is the most important resource in the work of a marketing agency, one of the interesting things was the way of managing projects and people. Each department has the so-called Traffic Manager, whose role is similar to that of a bus dispatcher. Traffic Manager gets a project or an activity and then distributes the activity to the employees. An activity sometimes takes 15 to 30 minutes and sometimes even several days. Precise measuring of activity per project, or per customer, may give profitability per customer.

Bane also presented several commercials made by them.

After two great lectures, the controllers took a break with plenty of refreshment and socialising. As our people say – both food and drink.

The next speaker after the break was Marko Srabotnik, Business Solutions Manager at Bisnode Slovenia. Bisnode is a Swedish company dealing with business information and having representative’s offices in 17 countries.

When entering the term “controlling” in Google, Marko found the following photo. Judge for yourself who of the people in the photo are managers and who of them are controllers…

According to Marko, the key steps in controlling are:

Marko then gave the presentation of Portfolio Intelligence tools. It is an online application whose database covers the companies in Serbia, Bosnia and Herzegovina, Slovenia and Croatia. This application provides an insight into the analysis of credit relationships in the region and does monitoring for more than 80 critical events in the portfolio. Marko thinks that a great advantage of this application is its simplicity.

This application is simple to use. Companies define groups with which they work (customers, suppliers) and the system calculates in a few seconds credit ratios for the portfolio and for individual companies. There are several parameters that are analysed:

The application also provides the opportunity of smart monitoring in the form of most important news. In addition, the application includes a customer grouping template.

Marko also presented a case study, i.e. the application of Portfolio Intelligence tools in a Slovenian company. After the study presentation, the controllers showed great interest by asking a dozen different questions. At the end of the meeting, our friends from Bisnode presented gifts to the participants of the 23rd ICV Meeting.

This ishow the 23rd ICV Serbia Meeting looked like. Once again, thanks to our friends from Bisnode for a great evening.