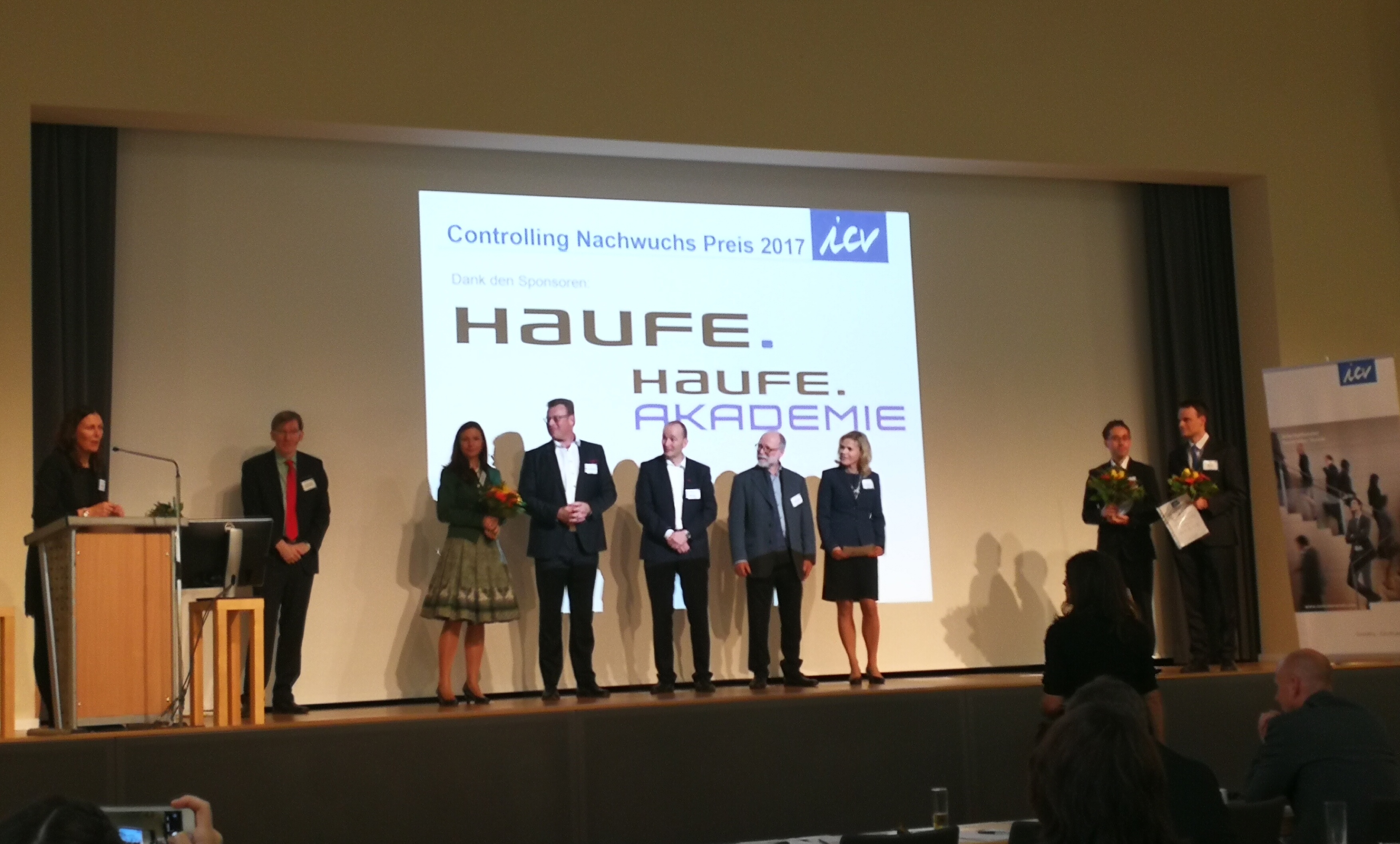 The award ceremony took place on November 18 at the conference “17th Controlling Innovation & Inspiration Berlin – CIB 2017″. First place went to Doreen Semper from the Beuth University of Applied Sciences Berlin for the thesis “Employee management in the Customer Service Center illustrated on the example of an inbound project”, supervised by Prof. Dr. Hans Schmitz. Gerald Weißensteiner from the University of Applied Sciences Graz, Campus 02, majoring in Accounting and Controlling, won second place with his bachelor thesis “Selection of possible KPIs and conception of a key figure cockpit using the example of WO & WO Sonnenlichtdesign GmbH & Co. KG”, supervised by Alexandra Knefz-Reichmann and reviewed by Prof. Dr. Michl. Third place went to Fabio Britz from the Technical University of Kaiserslautern for his master thesis “Transfer pricing between management and taxation: clarification of target conflicts based on a case study”. The work was supervised by Florian Beham and Prof. Dr. Volker Lingau.

With her thesis, the award winner excellently succeeded in depicting the value chain in a company and in defining process indicators, said Jury Member Ute Schröder from the Controlling-Benchmark-Zirkel in her laudatory speech. The juror justified the Jury’s decision with the current challenges posed by digitization: “The digital transformation is partly shaking companies to their very foundations – and tasks and the role of the controller are affected. Digitization will also radically change controlling. In the Jury we agreed that in the future it will be more and more important to know more and more about the company processes and the value drivers in the company through the data analysis. For starters this means mastering and understanding Big Data with the current data. That’s why we’ve given the first place to Doreen Semper.”

She commented on the award-winning thesis: “The approach made a very positive impression on us. Both external data and benchmarks were used as well as each process step was recorded cleanly and intensively matched internally with the parties involved through queries. Furthermore, there was a very close communication between the IT department and controlling. Here, a young junior controller has actively dealt with the company processes and presented them in a practically transparent way.” So it was possible for the company to set up a management system based on a monetary incentive system as a logical consequence. “We discussed a lot in the Jury as to whether the employees were included enough in finding the right key figures and the compensation linked to the performance. We found this point very important”, the juror continued. “In particular we evaluated positively and sustainably the evaluation after three months, when the methodical weaknesses and the satisfaction with the new incentive system were queried once again. As a result of this evaluation, corrections were also made in the company.”

The thesis of the 2nd prize winner (Gerald Weißensteiner, FH Graz University of Applied Sciences, ” Selection of possible KPIs and conception of a key figure cockpit using the example of WO & WO Sonnenlichtdesign GmbH & Co. KG”) is concerned with the development of key figures that should be used as key performance indicators (KPI’s). Using the example of a real company and, according to the Jury, “well comprehensible”, the author asked, which selection steps make sense, which evaluation criteria are to be used, which data are required, which advantages and disadvantages the selected key figures have. Jury Member Dr. Walter Schmidt: “Key figures are intended to help controllers identify potentials for improvement and to proactively integrate them into the management process. This is the position of the International Association of Controllers (ICV).”

“Management is something other than taxation!”, explained juror Gerhard Radinger in his laudation for the 3rd prize winner. “One could sum up the work of Fabio Britz to this short sentence. The purpose of so-called inter-company offsets is to avoid fiscal sanctions such as double taxation or penalties, but also to optimize the tax burden on multinational corporations.” In his excellent master thesis, “Transfer pricing between management and taxation: clarification of target conflicts based on a case study”, Fabio Britz theoretically examined the “difficult to overcome conflicting goals between management and taxation” and also “outnumbered” them with a case study. Radinger continues: “The work combines a topic exciting for the controller with a current socio-political topic in an outstanding way.”

Scientific foundation, practical relevance, feasibility, degree of innovation
To the Jury of the Newcomer Award headed by Prof. Dr. Nicole Jekel belonged this year Christina Keindorf, Deutsche Bahn AG, Gerhard Radinger, Trainer CA Controller Akademie, Dr. Ing. Walter Schmidt, Executive Advisor of the ICV Board, and Ute Schröder, Controlling-Benchmark-Zirkel. The jury met several times and discussed extremely critically, reports the Jury Chairman Prof. Jekel. 18 final theses were submitted from all countries in the DACH region. These covered the entire range from classical controlling instruments such as cost accounting and budgeting to risk management and sustainability controlling to the role models in controlling. The submitting institutions also covered the entire university spectrum, which speaks for a high acceptance of the Newcomer Award in the university landscape.

In its decision, the Jury had set the following criteria: In addition to the scientific foundation, the practical relevance of the issue, the direct applicability of the concepts developed and the degree of innovation of the theses were important. From 2018, the conformity of the thesis with the controlling perspective of the ICV or its critical discussion with it will be evaluated as a further criterion.

The ICV Controlling Newcomer Award is endowed with more than 4,000 EUR and is sponsored by Haufe Verlag and the Haufe Akademie.